course summary. This course is an introduction to what is known as formal or symbolic logic, requiring no prior knowledge of philosophy or mathematics. Logic is the science of reasoning—the systematic study of the principles of good and bad reasoning, and  has been a central and foundational part of philosophy, stretching back over 2000 years to the earliest investigations  of logic in Ancient Greece. Logic is both an historically important area of philosophy  and an indispensable  tool used in philosophy. Understanding philosophical texts without any knowledge of basic logic is typically very difficult and a general grasp of the meaning of various key concepts  is absolutely essential if one is to evaluate the strength of a philosophical position or philosophical claim. Virtually every area of philosophy—be it ethics, metaphysics, or epistemology—relies extensively on concepts from logic. The aim of this course is not to  communicate results about logical systems per se but instead to  impart a skill—the ability to recognize and construct correct derivations and countermodels. We will proceed via a graduated but unified development of logic from the basics of the sentential logic up to  predicate logic. Along the way we will take short diversions into the historical issues that led to various developments (e.g. the insights of Aristotle, the Stoics, Leibniz, Frege, Jaskowski, and Tarski, among others).

All content and information for this course including the lecture recording, tutorials, and homework exersices are accessbile from the LEARN page for this course. 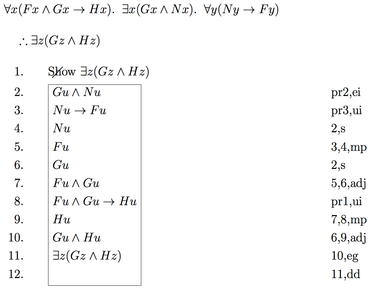